Wednesday was a marathon day for climate activists. Fortunately, HJR2 regarding offshore drilling was postponed, because I walked into the standing room only HB735 hearing on carbon pricing at 1:30 and didn't testify until nearly 5 pm.

(I stood in the doorway for three hours because it can often be difficult to hear testimony and the questions of soft spoken committee members. NH really needs microphones in every room where testimony is given. Hearing impaired people would struggle to hear much of what is being said, which could discourage them from giving testimony.)

The first to testify was State Representative Lee Oxenham of the Science, Technology and Energy Committee and one of the sponsors of HB735. 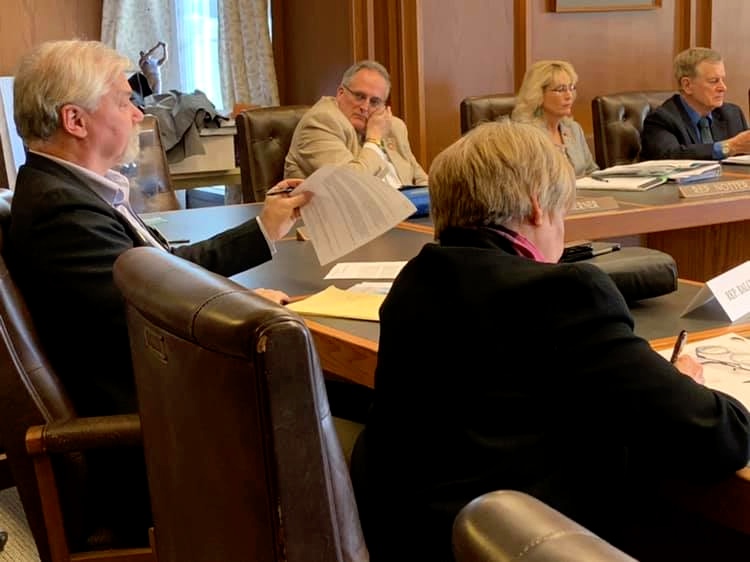 Governor Chris Sununu's brother, Michael Sununu, spent a lengthy amount of time using out-of-context IPCC data to dispute climate change, saying that the models used by the IPCC are broken, they can't forecast climate change, the public will punish legislators who support carbon fees and that he thinks the impact on the climate would be "negligible".

In fact, the IPCC touts carbon taxes as the most cost-effective means of reducing CO2.

Representative Somssich asked Mr. Sununu, "Since you decided to dive into climate change, I really want to know what makes you a climate change expert. Are you in any way involved in climate research? Have you credentials to speak of?"

"No, I never claimed to be...my point here is not to say that I'm a climate scientist....even the IPCC thinks that the models that this legislation and many policies it's based on, aren't really working."

After Chairman Bob Backus rebuked Mr. Sununu for reading his testimony to the committee while 17 people waited in the cue, Representative Somssich followed up.

"Because I am a member of the American Physical Society, the most prominent society of Physicists in this country, and because overwhelmingly throughout the whole world, the consensus of scientists is pretty uniform about climate change, while the models are not, would you believe that most people in the world in the scientific community don't agree with your conclusions here?"

Science, Tech & Energy committee member, Representative Notter, waved a photo of the Eiffel tower claiming carbon fees could bring yellow vest chaos to the streets and asked Mr. Sununu what NOAA and IPCC stand for. Looks, whispers and a few suppressed giggles were momentarily shared amongst committee members and those in attendance.

He replied calling the IPCC "International" and said, "NOAA is basically the weather agency in the United States".

I commend Representative Notter for asking. We all need to pause to ask questions, learn more and accept the pleas of scientific experts who are asking us to do what...to clean our air and water? Protect our health? Where's the controversy???

Former State Rep Michael Vose was concerned that carbon fees would cause Granite Staters to burn an inordinate amount of wood, citing that it's not kind to your neighbors to enact carbon fee and dividend.

A woman from Gilmanton testified saying it was out of her comfort zone, but as a civil environmental engineer, she wanted to speak in support of the bill.

A quote from Marge Shepardson was the leading sound bite on NHPR, that I heard in my car as I left Concord. She was a bit feisty at the hearing, which I thoroughly enjoyed.

3-5 minute testimony was more like 15-20 minutes for most. Despite some twisting of IPCC data and the usual concerns about gas distributors going out of business, some great points were brought up and thoughtful comments were made, including increasing asthma rates due to air pollution.

When I was able to testify I commented on how some carbon fee opponents wanted to know why NH had to be first with carbon fees (we're already involved in RGGI), so I asked why NH always has to be LAST. Why, indeed?

The question was raised as to what happens if a carbon fee and dividend bill is passed at the federal level. A bill such as the one introduced by Citizens Climate Lobby, would supersede a state law.

Some carbon fee opponents were concerned that customers would not be fully reimbursed under the currently proposed 70% dividend. One would expect them to be fully backing a national carbon fee with a 95% reimbursement rate and only 5% administrative fee.

The STE committee had a few members who couldn't seem to stay in their seats, or in the room. As the day wore on, some disappeared. Most were in attendance the entire time, never leaving their seats, respectfully listening and asking meaningful questions. Committee Chair Bob Backus, had to be school principal, moderating some snippy comments between committee members and those testifying.

While there was a lot of support for the bill, some important points were discussed, such as the need to give the dividend rebates in advance. They are usually paid monthly or quarterly.

Canada gives dividends in advance and carbon fees have been successful, although how they are implemented varies from province to province. The advance payment reduces the burden on those of middle and low income.

In order to save HB735, more research into how to implement a successful carbon fee and dividend program will be required. It's important that the committee not wait another year and aggressively address climate change now. Working in a reasonable bipartisan manner to put a price on carbon is a step in the right direction, but also a critical need for a deeply divided state and nation in political crisis.

You're hearing it here first. ECHO Action is unveiling a new hashtag and campaign for #FITNCarbonFeeLegislation!

The NH GOP and Dems frequently bicker and taunt each other on Twitter. If taken on seriously, carbon fee could be the common ground so desperately needed, and a real #FITN (First In The Nation) accomplishment New Hampshire could be proud of as we roll into 2020. New Hampshire can make real FITN history.

After testifying, Representative McWilliams asked about the membership of ECHO Action. It often takes me a moment to respond. Many organizations would give the number of their email subscribers. I said we have a core of about 40 members with networks throughout the state.

We have supported our friends in the North Country throughout the massive opposition to Northern Pass and continue to expand our work statewide. No one wants unnecessary massive energy infrastructure disrupting our scenic state, putting air, water, food, farms, families and future at risk.

Some of our most successful actions have been taken on by a small team, such as last summer's midterm election candidates. It's true what's been said about what a small group of dedicated people can do. On any given day, we're here doing it.

Our mantra, mission and hashtag are for a #FossilFree603. If you would like to support a #FITN #CarbonFee603, please join us today!

Contribute now to support stopping fracked gas expansion in New Hampshire and becoming fossil-free in the 603!

We received notification on Sunday, February 3rd, that HB735 is going to subcommittee to be studied. Your support is critical. Please send testimony to the STE committee.

NH Youth Climate Quotes, why should we be Fossil Free 603?

If Keene is #ReadyFor100, will they resist Liberty Utilities gas expansion?