Three terrible wildfires are burning in California right now. And all three are more visually menacing than usual, thanks to a unique weather phenomenon the flames are creating. The fires are burning so hot that they're making their own pyrocumulus cloudsystems, each up to five miles high. These clouds are also making firefighting efforts more difficult.

The pyrocumulus cloud above Idyllwild is insane. This is over the course of about 1.5 hours between 2:00-3:30pm July 26th as seen from Chihuahua Valley. #CranstonFire #pyrocumulus

Normal clouds are formed when the sun heats the earth’s surface, causing water to evaporate and rise into the atmosphere, where it cools and condenses into a cloud. This is a relatively slow process compared to the formation of a pyrocumulus cloud, where the intense heat of a huge wildfire burns the moisture out of the vegetation. This moisture then accumulates on smoke particles and rapidly condenses as it rises.

Pyrocumulus clouds are more commonly seen above volcanic eruptions, which produce lots of steam. If you’ve ever seen an evil-looking cloud creating dry lightning above a volcano, that’s a pyrocumulus cloud. They’re colored black or dark brown by the volcanic ash, whereas ones created by wildfires are usually dark gray, due to the smoke and ash.

The speed with which pyrocumulus clouds form and change, combined with the heat of the fire, can lead to quick, massive temperature swings in the atmosphere, producing unpredictable and severe winds. These can exacerbate the intensity of wildfires, and cause them to move or otherwise behave in unpredictable ways. And that all can put the lives of firefighters and the public at risk. 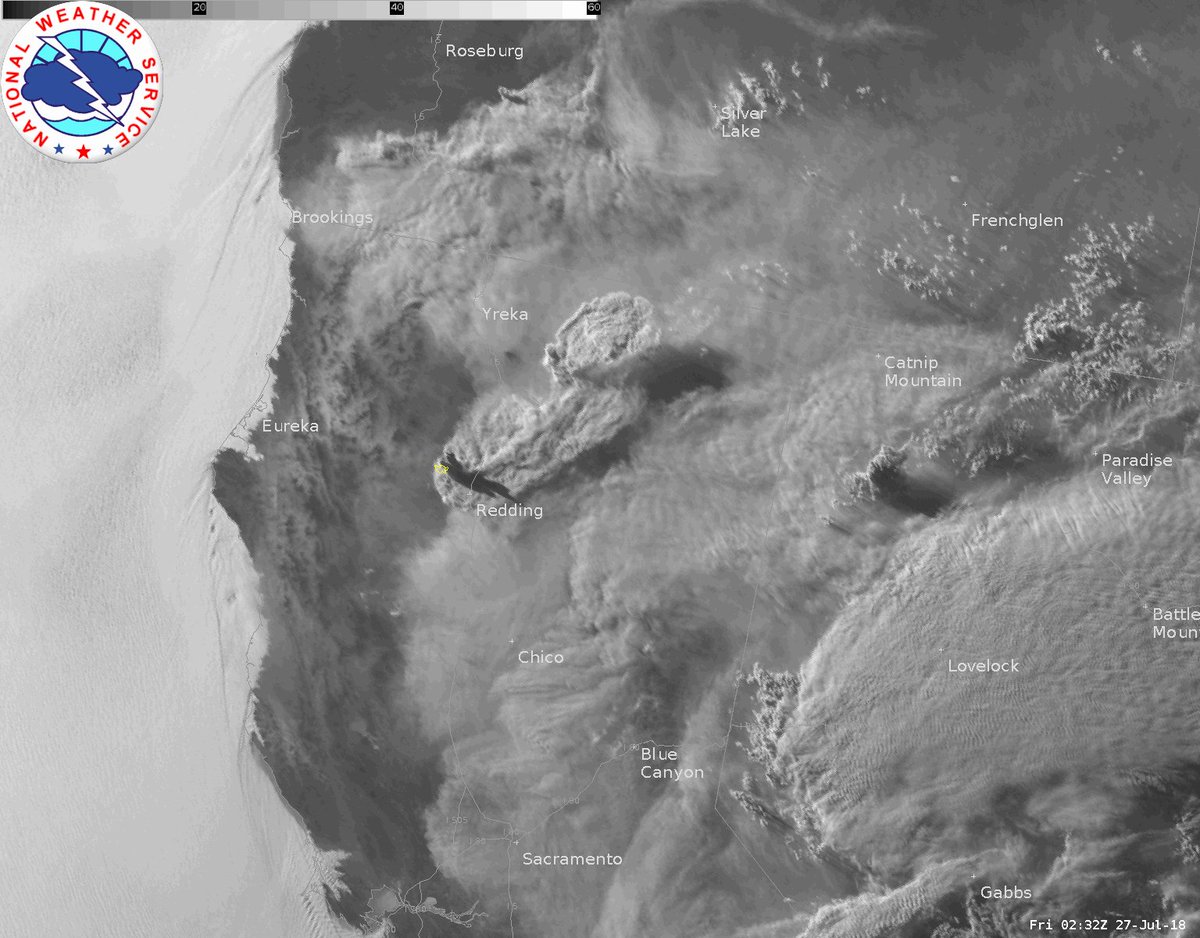 NWS Binghamton✔@NWSBinghamtonImpressive #pyrocumulus with long shadow from #CarrFire showing up on #GOES16 visible satellite from yesterday evening. Hoping for the best. Stay safe. 8:20 AM - Jul 27, 201838 28 people are talking about this

As I wrote this Friday morning, the Ferguson Fire continued to worsen on the doorstep of Yosemite National Park, the Cranston Fire burned homes in Idyllwild, above Palm Springs, and the Carr Fire on the outskirts of Redding, in northern California, was getting so bad to fast that it defied reliable reporting. It’s feared that the Carr Fire could prove as destructive as last year’s Napa Fires, which killed 42 people, burned 8,400 structures, and caused more than a billion dollars of damage to the state.

Sometimes, very rarely, pyromuculus clouds contain enough moisture that they produce heavy rain, potentially helping extinguish the fires that created them. Sadly, that does not appear to be happening this time.