America spends over $20bn per year on fossil fuel subsidies. Abolish them

While we need to leave fossil fuels in the ground, America is giving the fossil fuel industry billions to extract more.

Imagine that instead of taxing cigarettes, America subsidized the tobacco industry in order to make each pack of smokes cheaper.

A report from Oil Change International (OCI) investigated American energy industry subsidies and found that in 2015–2016, the federal government provided $14.7bn per year to the oil, gas, and coal industries, on top of $5.8bn of state-level incentives (globally, the figure is around $500bn). And the report only accounted for production subsides, excluding consumption subsidies (support to consumers to lower the cost of fossil fuel use – another $14.5bn annually) as well as the costs of carbon and other fossil fuel pollutants.

At a time when we need to transition away from fossil fuels as quickly as possible, the federal and state governments are giving the industry tens of billions of dollars to make the production of their dirty, dangerous products more profitable.

We already have to leave tapped fossil fuels in the ground

Crucially, the OCI report noted that if we want to meet the Paris target of limiting global warming to less than 2°C (and we do!), not only does the fossil fuel industry have stop developing new reserves, but “some already-tapped reserves must be retired early.” 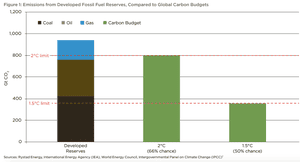 This reality is incompatible with continued US government subsidization of fossil fuel industry production, including $2.5bn per year for the exploration of new fossil fuel resources ­– new resources that simply cannot be developed if we’re to meet the Paris climate target.

To achieve that goal, we instead need to replace fossil fuels with clean energy as quickly as possible. And yet, OCI notes that permanent tax breaks to the US fossil fuel industry are more than seven times larger than those for renewable energy. Some of those fossil fuel subsidies have been around for over a century. And they’re making it profitable for the oil industry to extract resources that would otherwise be left in the ground:

at current prices, the production of nearly half of all U.S. oil is not economically viable, except with federal and state subsidies.

And as David Roberts notes, federal policy is also propping up the coal industry. Were they forced to meet modern pollution standards, 98% of currently operating coal power plants would be unprofitable compared to an equivalent natural gas plant. Coal power plants only stay open through regulations allowing pollution exemptions, and by forcing taxpayers to pick up the climate change bill.

Without a price on carbon pollution, Americans are effectively subsidizing the fossil fuel industry for the costs incurred through its products’ climate change damages. For example, think about the added costs to taxpayers for worse wildfires, droughts, hurricanes, and flooding, all amplified by human-caused climate change. In the absence of a price on carbon pollution, the fossil fuel industry doesn’t pay a cent of those costs. Taxpayers pick up the whole tab.

These costs can be estimated via the ‘social cost of carbon.’ It’s a difficult number to pin down, but even at the extremely conservative US federal estimate of $37 per ton of carbon dioxide pollution (some recent research pegs the value at more than five times higher), that’s about $200bn per year for America and $1.3tn globally. While direct government subsidies to the fossil fuel industry are expensive, they’re dwarfed by the costs incurred by failing to tax carbon pollution.

The OCI report noted that the Obama administration actually proposed to eliminate 60% of federal fossil fuel industry subsidies, but that proposal went nowhere for one obvious reason:

In the 2015-2016 election cycle oil, gas, and coal companies spent $354 million in campaign contributions and lobbying and received $29.4 billion in federal subsidies in total over those same years - an 8,200% return on investment.

Of those fossil fuel industry contributions to political campaigns, 88% went to Republican politicians. As a result, 97% of House Republicans oppose taxing carbon pollution, and the Trump administration is looking into every possible scheme to further prop up the dying coal industry. The GOP might as well rebrand itself as the Grand Oil Party.

American needs to rethink what subsidies are for

Subsidies are a way for the government to assist an industry, hypothetically for good reason. For example, wind and solar power help meet our energy needs without producing harmful pollution in the process. Because of the associated societal benefits, it’s possible to justify subsidizing clean energy. Alternatively, we could eliminate all energy subsidies and instead tax carbon and other forms of pollution. If rising energy prices are a concern, we could offset those costs by returning the pollution tax revenue to taxpayers.

There are numerous different policy options available to achieve the Paris climate target. We can avoid unacceptably risky levels of global warming while also achieving cleaner air, water, and public health without destroyingwhole landscapes. But continuing to funnel tens to hundreds of billions of dollars in subsidies to the fossil fuel industry is perverse and counter-productive, as the OCI report noted:

Removing these highly inefficient [fossil fuel] subsidies – which waste billions of dollars propping up an industry incompatible with safe climate limits – should be the first priority of fiscally responsible climate, energy, and tax reform policies.

Perhaps the Democratic Party should add ‘abolish fossil fuel subsidies’ to its platform.

"Where are our selectmen?" shouted out at Fremont pipeline meeting