Could this be the future of New Hampshire? Salting roads in winter to melt the ice and in summer to keep them from melting?

The Netherlands is going through a heatwave this week, like much of northwestern Europe, and several councils have chosen a novel way to stop roads from melting in the scorching sun - they've called the gritter lorries out.

Road-users in Arnhem were surprised to see the gritters scattering salt at busy junctions this week, but it seems that salt can be used not only to provide traction in freezing conditions but also to stop asphalt from melting, according to the Algemeen Dagblad newspaper.

The winter visitors have also been seen on the roads of Groningen, Hoorn and Geldermalsen in the last two days, especially at roundabouts where heavy traffic tears the softened asphalt from the road surface.

Arnhem council has been monitoring the road-surface temperature with sensors, and decided that when it reached 50 degrees Celsius the moment had come to act. "That's the time for us to start spreading the salt. And if the heatwave continues, the gritters will be out and about more often", a council spokesman told the ANP news agency. 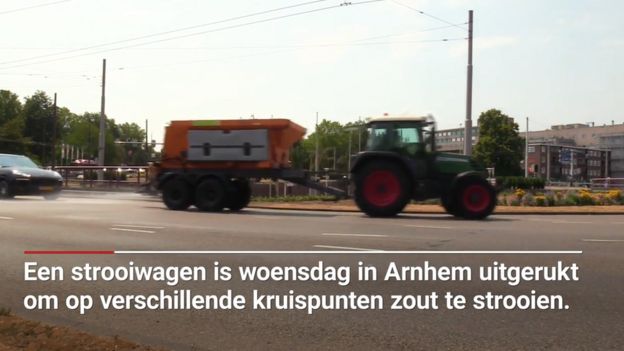